I Tested This Flash for a Week and Never Changed a Battery!

I’ve been photographing weddings and events for nearly twenty years, and do you know what one of the biggest pains in the ass has always been? The AA battery!

Why was it such a pain? Well, I normally shoot a wedding reception with 4 off-camera speedlites. That’s 4 sets of batteries. Before each day, I’d charge up all of my sets of batteries, put newly charged batteries in each flash, and head out.

Then, I’d wait in anticipation of when the batteries would start to die. I’ve never understood why the big camera companies like Canon and Nikon don’t put a battery readout on their speedlites. Some have a ‘low battery indicator’…great! But I’d like to have a little more insight other than I’ve got another five or six flashes on this before I need to change the batteries.

Usually, I’d switch the batteries right before the reception started because then I was done with portraits and I’d probably more than half drained my flashes. I never knew for sure because, again, no battery level readout.

Then, I’d hope that none of the batteries I was putting in my flash units were near the end of their life. Yes, even rechargeable NiMH batteries have a lifespan. While they can usually hold up for hundreds of charging cycles, the charge level starts to deteriorate after a couple of years.

Changing the batteries on four off-camera units in the middle of a reception? Not fun. Sure, you can use battery packs, but they’re also bulky and/or they require, guess what? More AA batteries!!

I want to carry less shit around. Don’t you? 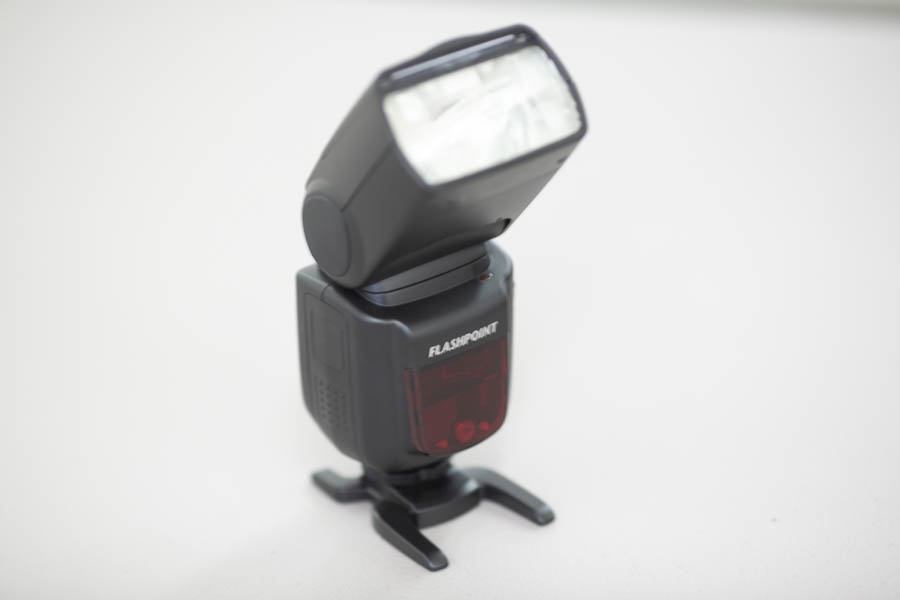 When I first heard about Flashpoint’s Zoom Li-on speedlight, I was intrigued. I’ve used third party speedlights before, and I wasn’t hesitant to try something that wasn’t made by my camera brand. At $180 each, they are significantly lower in cost than most big brand flash units. In fact, they’re a third of the price I paid for my Canon 600EX-RT units.

So, I could buy at least two of these Flashpoint units for significantly less than ONE big brand flash. What’s the catch?

Well, I am here to tell you, I haven’t found one yet.

Output So Similar, I Can’t See the Difference

I used the Flashpoint alongside one of my Canon units at two different events and two studio sessions. I noticed no noticeable difference in the output. Color temperature, power, TTL compatibility – all on the same level.

In fact, if anything, the Flashpoint unit recycled slightly faster than my Canon – which was loaded with brand new fully charged AAs – when I would shoot a burst of photos. It also produced a slightly more pleasing output on subjects that were further away from the camera. Not hugely noticeable, and possibly just my personal preference. That’s why I’m putting them on the same level.

I even tested them side by side with the same settings in a studio.

Maybe you’re thinking, “Yea, but am I going to have to spend a bunch of time figuring out how to use it?”

Nope. The controls are intuitive and easy to use. If you’ve used any other speedlight before, you’ll be able to pick up the controls very quickly.

Didn’t I start this post talking about batteries? This, in my opinion, is what makes the Zoom Li-on so special…

It is powered by a single Lithium-Ion battery pack. No more AA batteries falling out of your flash as you try to switch out, or making sure you have them in the right way…

“SWITCH THE PLUS TO MINUS…AND THE MINUS TO PLUS!!!”

And you can shoot foreeeeeeveerrr….well, maybe not forever. Okay, I was being hyperbolic.

The Flashpoint marketing information says that you can get over 400 full power flashes on one charge. That’s pretty impressive. Is it true?

Well, I don’t know about full power flashes, but in my testing of the unit, which lasted about a week, I popped the flash this many times:

The battery readout still said 1/2 power. One HALF!!!! I was using my Canon unit as well as the Flashpoint, and didn’t take as many photos with it at those events, and I still had to change the batteries out twice over a similar number of shots.

I love this flash! I bought two of them! I’m using them in conjunction with other Flashpoint lighting units at events (more on that at a later date) and I couldn’t be happier with the results.

NOTE: The Zoom Li-on is a rebranded version of the Godox V850 flash. While you might be able to find the Godox version elsewhere for less money, I would HIGHLY recommend purchasing the Flashpoint version. In my research, based on reviews, I found that the Flashpoint units are better constructed. Also, since Flashpoint is located in the United States, it’s easier to get in touch with them if you do have a problem with your unit as opposed to reaching Godox, who are located in China.

3 Surefire Ways to be Generous and Get More Clients

You Might Enjoy These Posts:
Tourbox Graphics Editing Controller Review What are the Parts of a Camera Lens? Why do photographers keep boxes?
batteries battery flash flashpoint speedlight speedlite